Forty-five years ago—on November 22, 1976—we were first introduced to Cathy on the funny pages. The character was a diversion from those we typically saw in comic strips: a single woman perpetually driven to the brink by the “four basic guilt groups”: her mother, her dating life, her job, and her near-constant chocolate cravings. In the four-plus decades since, much has been written about Cathy and her reflection on women and feminism, but the connection fans feel to the characters, and to creator Cathy Guisewite, feel eternal.

The original Cathy strip ran until 2010 when we saw the eponymous character announce her pregnancy to her own mother. Guisewite had officially retired. But, when the COVID pandemic hit in early 2020 she started drawing again. Cathy Commiserations was the result (recently compiled into the book called Scenes from Isolation), and it once again struck a nerve with all of us as we grappled with how to manage our lives and emotions during a global quarantine. Here, Guisewite tells about why she started drawing again, and looks back at 45 years of Cathy.

You mentioned you weren’t going to draw again after Cathy ended in 2010—but then, COVID. What about that isolation prompted you to pick up your pen again?

When the pandemic hit, some found comfort in returning to their roots of baking and knitting. I found comfort in returning to my roots of dumping my angst on paper. Drawing Scenes from Isolation helped me keep my sanity and forced me to stop buying things online for at least a few hours a day while my hands were busy with colored pencils. I even found comfort in the self-imposed panic of putting myself on an almost daily deadline for awhile. Best, I found great comfort in connecting and commiserating with people without ever leaving my home or getting out of my pajamas. I never meant to pick up the story line where the comic strip ended—so the things I’ve posted on social media and GoComics are a real return to the roots of the strip: just one character sharing a moment.

I’ve read in past interviews that you didn’t really want to call the strip Cathy. What is your opinion on that now, 45 years later? ​​

Did I want readers to think the Cathy in the newspaper was a picture of myself wailing by a phone that didn’t ring and eating everything in the kitchen while waiting for Mr. Wrong to call? I did NOT! Did I want people to think it was some kind of ego trip to name a character after myself who had to call in sick for work because she couldn’t get her power suit zipped during the peak of the women’s movement? I did NOT! Do I think sharing the name helped women feel they had a real-life friend? I do. As gratifying as it was to connect so deeply with other women, did I still need to hide in the ladies' room some days when the strip came out? I DID!

Cathy Andrews’s name is partially after our (Andrews McMeel Universal) Kathy Andrews, who, in 1976, sifted through her husband Jim’s pile of submissions and voted in favor of your work. What’s your favorite memory of Kathy?

My favorite memory of Kathy Andrews is her great, joyful, loving laugh. It was the laugh that encouraged me for years, and the laugh that launched my comic strip. When I sent my submission to Universal Press Syndicate in 1976, my “art” was the frantic scribbles of a frustrated 25-year-old who couldn’t draw. My “writing” was the humiliating AACK’s of a woman wrestling with love, career, and a carton of fudge ripple ice cream. Kathy’s husband, Jim—the creative head of the company—took my submission home the night it arrived to see if Kathy thought anyone could possibly relate. Kathy said YES! It was her laughing response to every page of my strange submission that was the reason Cathy became a comic strip. Her laugh is why Universal Press Syndicate stood behind the strip for those early years while I figured out what I was doing and Cathy gained a following. When Cathy needed a last name in the comic strip, I made it Andrews to honor the strip’s founding mother: Kathy Andrews and her beautiful laugh. 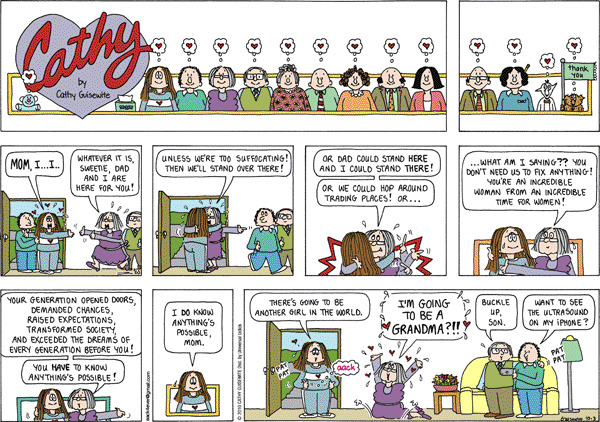 If I were writing the strip now about Cathy and her 12-year-old daughter, I think it would sound exactly like the strips I wrote about my mother and me, only Cathy would be the mom this time and would be even more mortified. So many thrilling new options. So many dating apps, so much skimpy lingerie.

This has always been a personal curiosity of mine: Why is Cathy the only character with large eyes and no nose?

My first drawings were literal illustrations of me at my worst, meant to be shared with no one but my mother. At the time I wore big glasses, so I drew myself with big glasses. The glasses took up so much room on the face, I couldn’t figure out how to include a nose. When Universal Press saw the drawings, they wondered what the “sticks” were on the sides of Cathy’s head. I explained that those were the earpieces of her glasses. They said they thought the big “glasses” were giant eyeballs and that I should just keep them as eyes and eliminate the ear piece sticks. Because I never did figure out how to include a nose, I almost never drew Cathy in profile. With no nose, she looks even more ridiculous from the side.

Recently, there’s been a spate of in-depth long-form pieces written about you and your work, along with a podcast called Aack Cast by Jamie Loftus that’s on many best-of lists. What’s your reaction to these think-pieces, and why do you think that you and Cathy are back in the cultural zeitgeist?

I especially loved Jamie Loftus’s Aack Cast because of how passionately she urged listeners to consider Cathy beyond the unflattering memes and really read the words of the strip in the context of the years in which they were written. I love how she integrated Cathy into the history of the women’s movement. It helps explain my generation to the daughters and granddaughters of my generation. Many women in my age bracket have told me they’ve loved reconnecting with Cathy as a dear friend during these extremely frustrating, mashed-potato-filled months of COVID isolation. Some who used to hate the strip have told me they’ve come to appreciate it. Young women who were unfamiliar with the strip have told me how much they relate not only to the new one-frame cartoons I’ve been doing, but to classic strips posted on GoComics. The strips help them laugh at themselves and better understand their moms and grandmothers. So much has changed in the world….and lots and lots hasn’t. 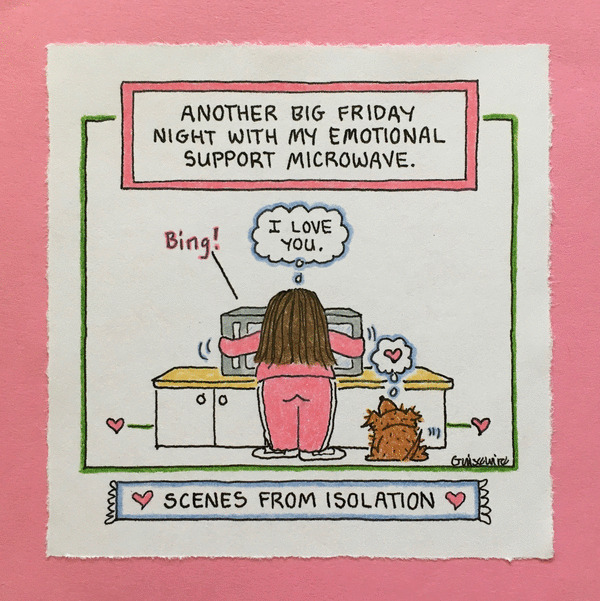 Do you ever allow yourself a 30,000-foot view to reflect on the impact you’ve had on our culture? And/or the affect your work has had on American women? If so, how does that reflection make you feel?

I will always be humbled and proud to know my work was displayed on the place of highest honor: the fronts of women’s refrigerators, right next to the food.

If you launched Cathy today, what would you do the same? Differently?

I would want to make Cathy a role model of more victories, fewer defeats. My goal would still be the same, though: not to transform anything, but to help women make it through the next five minutes. We can’t take on the world if we can’t make it out the front door. Anything else you’d like us or our readers to know? I’m just so grateful for the life I’ve gotten to have, the heartwarming connections I’ve been able to make, and for having a job that allowed me to deduct chocolate cake as a “research” expense.

Be sure to follow Cathy on GoComics, which is running re-runs, and Cathy Commiserations, which is being updated up to four times a week with new comics!