"Bob the Angry Flower" Is the Latest Feature To Join GoComics

This week, an angry flower joins GoComics. We know what you're thinking: An angry flower? Isn't that an oxymoron? Well, if you think that, you haven't met Bob yet.

Bob the Angry Flower is a weekly comic strip where the titular main character bitterly commentates on everything from pop culture and science to politics and religion. If it's a conversation stirrer, chances are Bob has something to say about it.

Get to know creator Stephen Notley as Bob the Angry Flower joins the GoComics family!

How did you get into cartooning?

I was always into cartoons. I read a lot of classics, like Peanuts and Calvin and Hobbes. I also drew stuff in high school. But the real kicker was getting to university in Alberta, Canada. There was a student newspaper called The Gateway. After a year, I decided I was going to submit a cartoon to the paper. It wasn't Bob yet—it was another strip called The Germ, which was kind of a parody superhero comic. By doing a comic for a student newspaper, you're getting in the good habit of doing it weekly and you're getting to see it in print.

How was Bob the Angry Flower created?

I did [The Germ] for a long time and eventually thought that I wanted to try something a little bit different—something that's not quite so continuity-based. I wanted to do something with a little more freeform.

I ended up doing a little doodle of a flower with a mohawk. I thought, "An angry flower, that's kind of neat. I don't know of any others out there." It's very simple and iconic: You just draw a flower from an angry face, and he's got this kind of raging attitude, like he stands on a street corner and screams at people about stupid stuff.

I already kind of had the habit of drawing cartoons, so I started drawing this angry flower for the university's summer student newspaper, which was called The Solstice. Then, I just sort of switched over completely and did Bob at The Gateway for a few years. 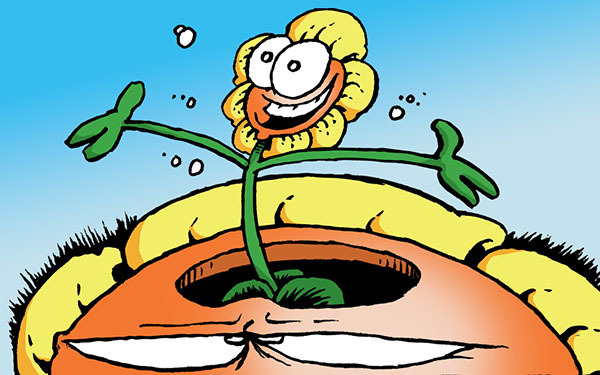 The strip is over three decades old. How has it evolved over the years?

I've had a few different characterizations of Bob over the years, but it is really an autobiographical script with this very thin veil of metaphor. Whatever grinds my gears that week is something I draw a comic about. But I still try to keep my interpretations separated out by a level of metaphor that readers can apply more generally to these ideas.

As for how the strip has developed visually, I have to confess that Bob has kind of followed the trajectory that is not completely uncommon: In the early days, you do a lot of crazy experimentation and tend to put lots and lots of detail into characters and backgrounds. Over time, you tend to remove what you consider to be unnecessary details because it's more work. Sometimes you kind of justify it by saying, "I don't know if this work is getting the attention of the reader." Sometimes it's actually interfering with the content.

How would you describe your cartooning style?

A storytelling technique is I often try is I take some horrible idea and then have Bob adopt that position and really argue it ardently in order to sort of expose the absurdity of it. Bob sort of takes on the role of the bad guy. Another one of my rules is that I'm kind of consistently inconsistent: Bob died in one strip, he's alive in the next one.

What I'm good at are expressions and gestures. It's kind of a cliche, but cinematically, I really try to break panels down such that each part is like a shot in a sequence that moves the story forward. Every panel is like a different performance. I like looking at cartooning as a two-dimensional picture plane.

Even though I'm not an animator, I find trying to invoke motion through comic cartooning really fun. For example, fairly early on, Bob's pedals started to curl back into themselves to make it a little more 3D-ish to give it more sort of space and volume.

Is there a strip of Bob the Angry Flower that took of in a way you didn't expect it to?

I did have some freestyle comics that would have been what we would now call "viral" 15 or 20 years before viral was really a word we use to describe this. Now, I can't do a viral thing to save my life. I did have a few cartoons that seemed to catch people's attention, one of which was "Bob's Quick Guide to the Apstrophe, You Idiots" (see above).

Keep up with this grumpy plant by following Bob the Angry Flower on GoComics!